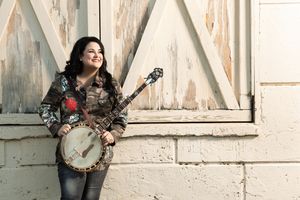 Multi-award-winning Bluegrass and Americana artist, Lizzy Long, recently released her sophomore album, Dreaming Again, a diverse mix of traditional bluegrass tunes with a modern twist. Long co-wrote five of the songs on the album and puts her own unique spin on covers of popular songs, such as Queen's "Keep Yourself Alive," as well as Broadway hits "Memory" from Cats and "Wishing You Were Somehow Here Again" from Phantom Of The Opera. Dreaming Again is produced by Wayne Haun and released as the debut project from Vine Records.

In addition to playing the piano, Lizzy's musical repertoire also includes the fiddle, guitar, autoharp, bass, banjo, and mandolin. She has played with renowned acts such as Mac Wiseman, Jim and Jesse, The Lewis Family, and Earl Scruggs. Lizzy also performs with Little Roy Lewis from The Lewis Family, as part of The Little Roy & Lizzy Show.

BroadwayWorld had the chance to catch up with Lizzy about the new album; how she describes bluegrass for new listeners; and her love of blending bluegrass music with iconic Broadway songs.

Congrats on Dreaming Again! How would you describe the journey of creating this second album?

It has been wonderful! I was raised on bluegrass music - my aunt used to play piano and introduced me to Broadway. It has been an incredible journey to work with my partner and producer, Wayne [Haun], and be able to try something new. I never want to feel pigeonholed into one genre of music, and really enjoy fusing the traditional sounds of bluegrass with the music of iconic Broadway shows.

I had the chance to travel out to LA to record the album and have discovered many enlightening moments along the way. My ultimate goal is to create music that is relatable for all.

For those who aren't familiar with bluegrass music, how would you describe its style?

Bluegrass is a learned sound and really takes years to hear -- you have to stick with it and keep listening. For those new to bluegrass, going back to its founding, with the music of Bill Monroe, will be really helpful to understand the history.

Bluegrass also has elements of jazz and cabaret, and similar to Broadway musicals, there is always dancing! The music features so many instruments such as the fiddle, mandolin, acoustic guitar, banjo, just to name a few, that you wouldn't always expect to hear! A lot of the sounds can be softer with all of the strings incorporated, so it just takes some time for this unique genre to reveal all of its depth to you. I can guarantee that there will be pleasant surprises!

What's the secret to blending bluegrass and Broadway and how did you decide to take that risk?

Wayne and I really love Disney and Broadway and were able to record "Feed the Birds" from Mary Poppins for my first album and I was thinking about how I'd love to be able to do more Broadway and bluegrass infusions. This time around, I was able to record ""Memory" from Cats and "Wishing You Were Somehow Here Again" from Phantom Of The Opera and was so excited to incorporate more of the sounds of bluegrass. I feel like it's a way to marry two of my favorite worlds and make bluegrass more accessible to the theater community.

How have you had to adjust promotional plans for this album, to fit into this new virtual world?

While releasing this album during a global pandemic isn't easy, it's important to remember that people still want to be entertained and need inspiration now more than ever. I've been able to pivot and do Facebook Lives, virtual performances, and other special events over the last couple of months.

I do really miss singing in front of live audiences and love feeding off that energy but have been having a lot of fun sharing bluegrass with many more people online. I hope that they are inspired by the messages within the lyrics and feel uplifted.

Do you have any words to live by?

I would sum it up in three ways:

"Anything worth a damn isn't easy."

"Every dog has its day."

"Everything happens for a reason."

Ultimately, I'm still figuring it out, but one truth that I'm certain of is how important art is and believe in its magic to change lives.